The trilogy was inspired in structure by traditional Japanese noh drama. This form of play, described as somber and tediously long, uses a shrine-like structure for a stage and makes its actors wear expressionless masks. Noh became popular among the Japanese Shogunate during the 14th century.

A noh play is divided into three parts: (1) JO, the introduction, where a main or secondary character tells who or where he is; (2) HA, the development, where the major and minor players interact at length; and (3) KYU, the conclusion, where the lead character appears in his true form or self.

Noh drama makes extensive use of other literary forms in its verses. Among these include earlier plays, poems, Chinese couplets, Buddhists hymns, and popular songs. These writings are merged into the part prose, part verse text of the noh play.

I conceptualized Shadow Play as a post-modern, deconstructed noh drama that attempts to explore the beginning of the relationship between Kage-Maru and Sarah Bryant, intercutting between their own thoughts and the events that surround them.

Although few may realize it, give or take, these two exceptionally skilled and noble fighters are alike in more ways than one. They are people who have been raised along a certain line of following; in Kage’s case, he was the tenth-generation Shadow Warrior of the Hagakure, while Sarah initially grew up under the hawklike care of her prodigously rich parents, then went on to pursue Jacky’s desired path in life, not her own. And as the events in the anime indicated, they are both actually very selfless people, willing to make sacrifices for those they love.

Madonna’s Ray of Light was the album I deemed most appropriate for the trilogy, since it had the Eastern flavor that nicely fit Kage’s Oriental disposition. Choosing “Frozen,” “Has To Be,” and “To Have and Not To Hold” for my deconstructed noh verses was easy because the lyrics themselves mirrored the sentiments I wanted the characters to convey in Shadow Play.

Thanks bunches to Adilah, Jade and Jelly for the highly encouraging feedback on this fic. And to Miss D for vehemently arguing that Sarah has good reason to bandage Kage’s arm.

Back to Shadow Play 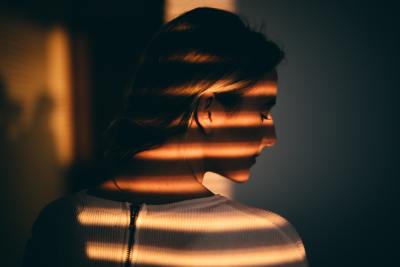